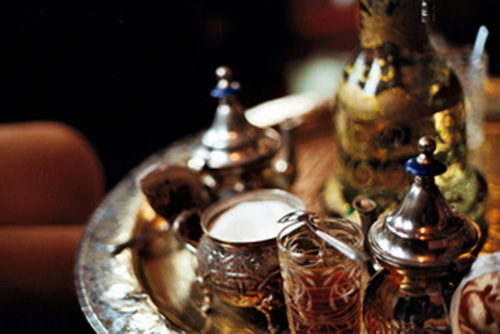 Rest and refreshment in a Granada tea house. Photo by: Alexis Stroemer

The Alhambra is not Granada's only Moorish legacy. The narrow, cobbled streets of the Albaicín, the city's Muslim quarter, have retained a lively Moroccan ambience. Here, alongside small open shopfronts festooned with bright fabrics and leather goods, the fragrant darkness of the traditional Arab teahouses or teterias beckons you in for refreshment from the blazing summer sun.
Though they reflect an ancient Arab tradition, the teterias in Granada today were opened during the past century and this one by homesick Moroccan immigrants working in the city, who wanted familiar—and alcohol-free—venues to meet their friends or rest after a hard day.

Today's teterias are frequented by a mixture of newspaper-reading locals, tranquility-seeking tourists, and serious-looking students juggling textbooks and notepads. The teteria is an oasis of quiet in the noisy city. Modern North African background music provides soothing drum and guitar rhythms, a continent away from the normal Spanish bar soundtrack of popular flamenco, crashing crockery and MTV.
Though each teteria is subtly different, the décor tends to be definitively oriental, with long benches cushioned in rich fabrics and often draped with rugs, facing low carved stools and tables. Restfully gloomy interiors are lit by many candle lamps of pierced and coloured metal. Some, like the teashop in the Hammam, or Arab baths, even feature gently burbling marble fountains in the centre of the room.

Nearly all the teterias in Granada are concentrated in just two bustling streets at the heart of the Albaicin, Caldereria Vieja and Caldereria Nueva. Opening times vary considerably, from 12 noon to 3.00 pm or even later.
Kasbah, at c/Caldereria Nueva 4, makes poetry even from its opening hours, "from three in the afternoon until the candles burn out." Even reading the menu seems to have a cooling effect: "The Last Sigh of the Moor" "Kasbah" and "Flor de Sherezade" are listed next to Egyptian Rose-mint-cinnamon, violet and bergamot teas.

A taste of the Orient

Most of the teterias serve a range of herb, spice and fruit teas, as well as batidos, delicious blends of milk with fruit, less cloyingly sweet than many commercial shakes. Avocado, banana and coconut, or almond, date and honey are just two of the unusual flavours on offer at Kasbah.
Cloyingly sweet indeed, but heavenly in small doses, are the typical Arab pastries such as baklava and khadaifi that seem made to accompany the liquid refreshment. For a more substantial snack, try pastela, the rich filo pastry filled with spicy chicken and egg. And if you've really got into the middle Eastern spirit, you can end your meal by puffing away at a narguile, the Arab smoking apparatus, filled with fruit-flavoured tobacco.
Finally, be careful as you leave a teteria; you may experience culture shock when you find yourself back in your property in Spain!