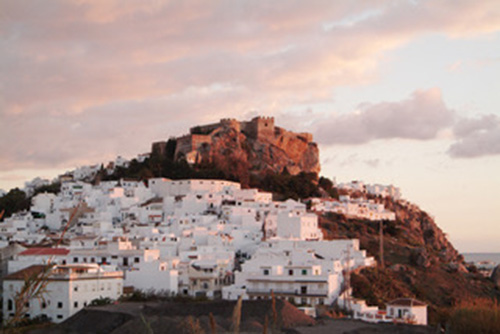 Salobreña’s sugar-cube houses cling to the rock and castle that dominates the town. Photo: Fred Shively.

Welcome to Spain's shapely coastline of gently developed properties and hidden beaches, where the sun ripens mangoes in summer and lights up the ski slopes in winter.
You didn't know Andalucia had a tropical zone? It doesn't, although the name "Costa Tropical" should give you a clue as to the healthy total of sunshine hours notched up every year, enough to ripen the avocado, mango and custard apple orchards that clothe the fertile plains of Granada province's very own coastline. Summer temperatures rise to around 30C in July and August, and rarely dip below 8C in winter, while rainfall is low, providing ideal conditions – and not just for fruit!

Historically, climate has shaped the Costa Tropical from its earliest times, with extensive sugar cane plantations thriving as early as the 12th century. Today, the region's fortunate location is an even more potent attraction. Granada and its exquisite Alhambra Palace are just 45 minutes through the leafy Lecrin Valley from Salobreña. And with the Sierra Nevada ski slopes just over an hour away, a skiing day trip offers a bracing contrast to the beach.

Around 60 kilometres (38 miles) of snaking coast road, the N340, ties together a region of contrasts in landscape and lifestyles, stretching from west of Almeria city through the bustling administrative capital, Motril, and along to pretty La Herradura before merging into the beginnings of the Costa del Sol at Nerja. Smaller, scenic roads taper inland to new property hotspots such as Velez de Benaudalla. Take the N323-N902 and swap marine for mountain scenery. The drive takes you through the lush Lecrin Valley and ancient white villages that lead to Granada's picturesque city.
For the right location to live, work and play, pass over resorts like over-the-top Almerimar, west of Almeria, set in a shimmering sea of plasticultura greenhouses, and keep driving past boom town El Ejido and its drab cousin Adra. You might love Calahonda and Castell de Ferro – if you're a scuba-diving fan. Or be tempted to tarry at Motril's smart new golf resort, the Playa de Granada.

However, many British and Scandinavian settlers agree that the most beautiful stretch of the Costa Tropical begins when you get to Salobreña, its sugar-cube houses clinging to the fortress rock on which the Moors built a castle in the 10th century. Climb to the top of the old town on a mild spring day through narrow streets blazing with vivid flowers against whitewashed walls – the sweeping views of mountains and sugar-cane plantations are worth it.
Salobreña, especially the upmarket Monte de los Almendras area, has been a favourite with Scandinavian buyers for years, but in recent years British buyers have shown an increasing interest in buying holiday homes here.
Development in Salobrena is gentle and the population is less than 15,000, so except during hot and heaving August, you'll find a table at excellent mid-priced seafood restaurants such as El Peñon or Bahia, where you can all but dip your toes in the waves as you eat. From snorkeling and diving to mountain biking and fishing, with its parks and playgrounds, Salobreña is a wonderful base for a family holiday home or investment buy.